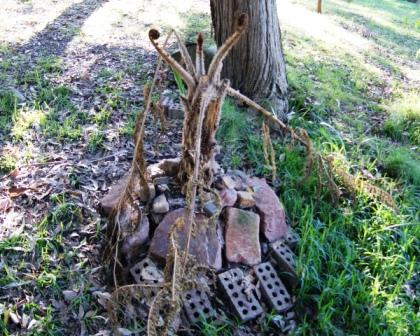 Now the Cyathea cooperi has been in place in its' new position for about ten weeks, you can see that it has recovered from the shock of the move and is growing new fronds.  The three old fronds have slowly withered and the nutrients have moved back into the plant.

I have not watered it by hand since I moved it, except for a long soaking on the day of the move.  Relying on rainfall and the milder climate over winter, it has re-shot a brace of three fronds and although they are thinner and won't be nearly as big as the previous fronds just yet, it is well on its' way to getting established. 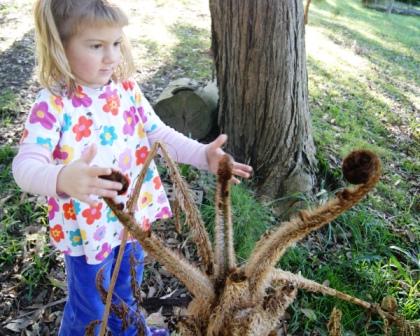 Just included a shot here of a friendly daughter to add some perspective - you can see how the trunk stands about 500mm emergent above the soil line, and remember there is at least that much in the potting mix around the base.

Here's hoping it keeps going on strong and is robust enough to survive the heat and wind of summer. 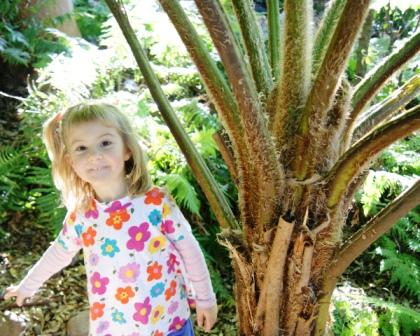 This is a Cyathea planted at the same time as the transplanted one, and demonstrates clearly that tree ferns thrive once established and not disturbed. It is not my usual practice to lift and move plants around the garden for exactly this reason. 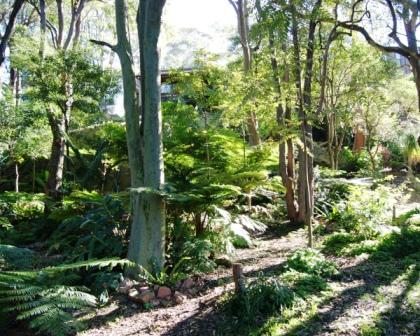 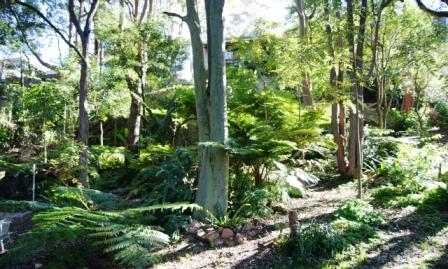 Here are some landscape shots of the garden as a whole - it is coming along nicely even though I have left it without any extra watering since February.  I like to let the soil dry out over winter.  I did go this morning and water for a good hour though, as without water everything grows very slowly.  And the winds of August dry things out even more. 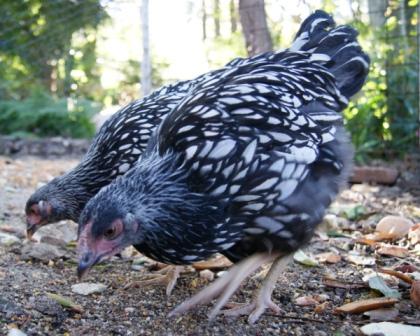 And finally, introducing some of the newest members of the flock - some silver lace wyandottes bought from a lovely lady at the Maitland Wyandotte Show 2013.  At three and a half months, they might be a little vulnerable to the rest of the flock but I am offering them protection for a couple of weeks.  Just love that colour!

I came to Personal Coaching after a long period of struggle, self rejection and internal conflict. In my journey of self discovery I read and studied the most profound personalities and thoughts on self help and positive psychology. It is a privilege to be able to share this with you - I am available on 1300 084 004 or connect by subscribing to my email list here.

we are in
AustralianPlanet
NSW Sydney Area